June, July, August and September have been the most memorable months of 2019 so far. Back in early May I started work on a large willow tree overhanging the river. It’s a stunning tree but does require heavy maintenance as its branches creep down into the water, catching floating debris and creating a natural build up. I spent three days cutting back, clearing branches and plastic that had been discarded further upstream.

The willow now looked healthy and rejuvenated and I was hopeful that this would provide a social spot for any fledgling Kingfishers this summer. I had a strong indication that the female was on eggs as her daily routine and perch visits had stopped. The male had not been seen for quite some time and his sudden reappearance in late May suggested things were looking good.

This site had been good for kingfisher broods for several years previous. The location is pretty unique and provides healthy fish stock and protected nesting spots.

Whilst it was quiet and virtually no kingfisher presence, we fitted one of the new remote 4K cameras next to a fixed perch. I found this fallen branch some while back and kept it safe as a perfect ‘Kingy stick’. There’s certainly no guarantee this will be used but I had a strong sense that it was now an ideal setting. I could visualise those electric blue flashes, inches from the river, an orange arrival as it landed on the perch. Please let it happen!

The willow had water flowing beneath it, a small sheltered pool area and plenty of perches and branches. I waited. 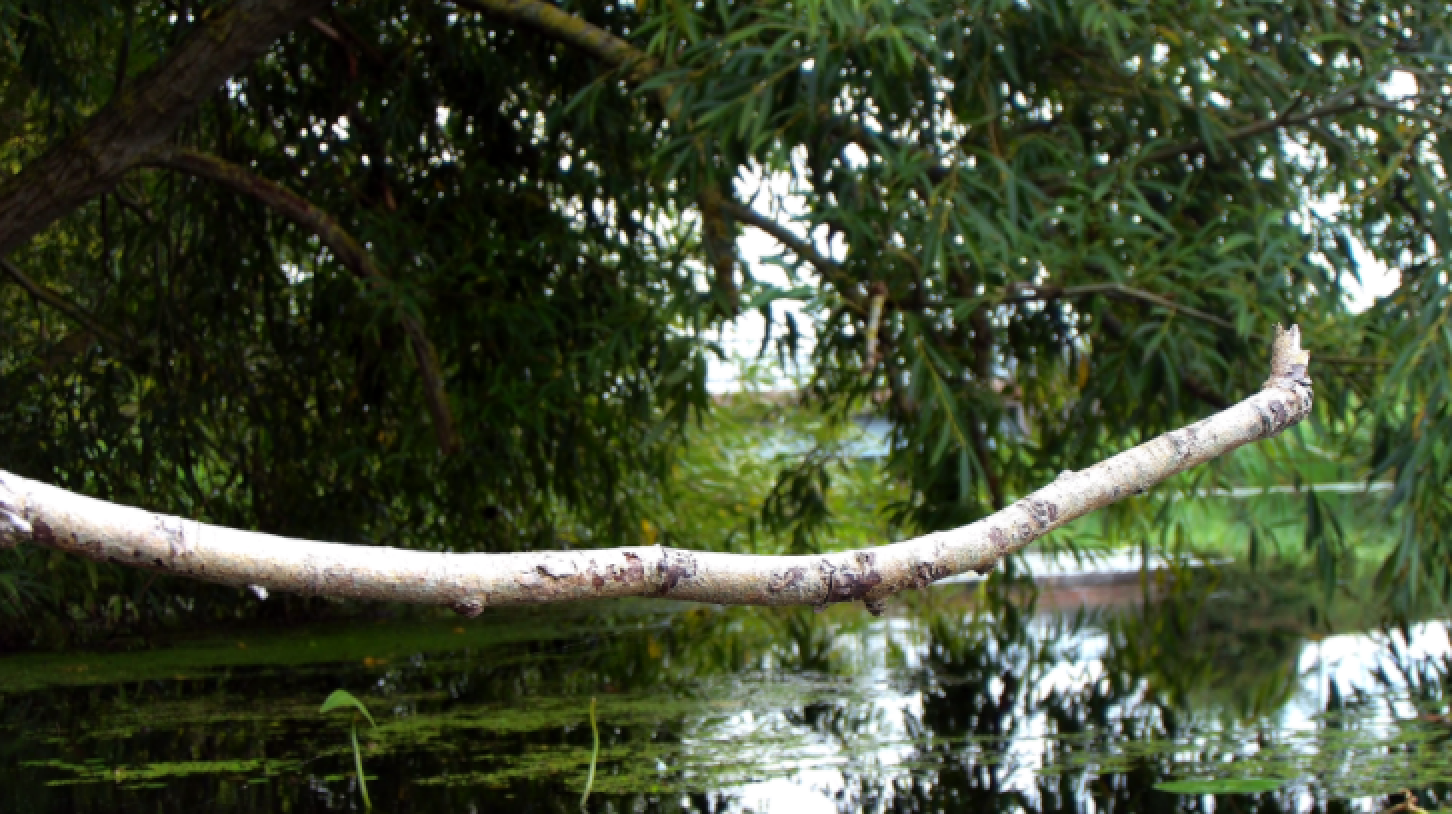 Everything fell into place in June and the first ‘peep peep peep’ of the first fledglings could be heard. As hoped, the willow tree was a natural attraction and the perch was used almost immediately. Three zippy little fledglings, it was a joy to watch.

Not long after, on July 3rd I saw the breeding pair mating – every reason to be excited about a second brood. 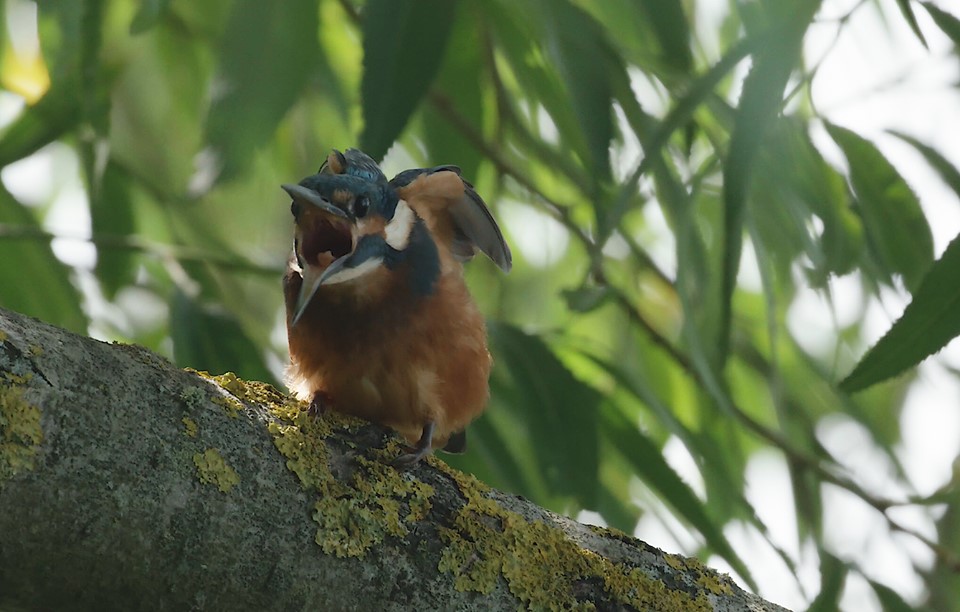 I enjoyed watching the young fledglings learn how to be Kingfishers. I would sit motionless, hidden out of sight watching these youngsters dive for fish and mostly miss. Catch and drop fish. 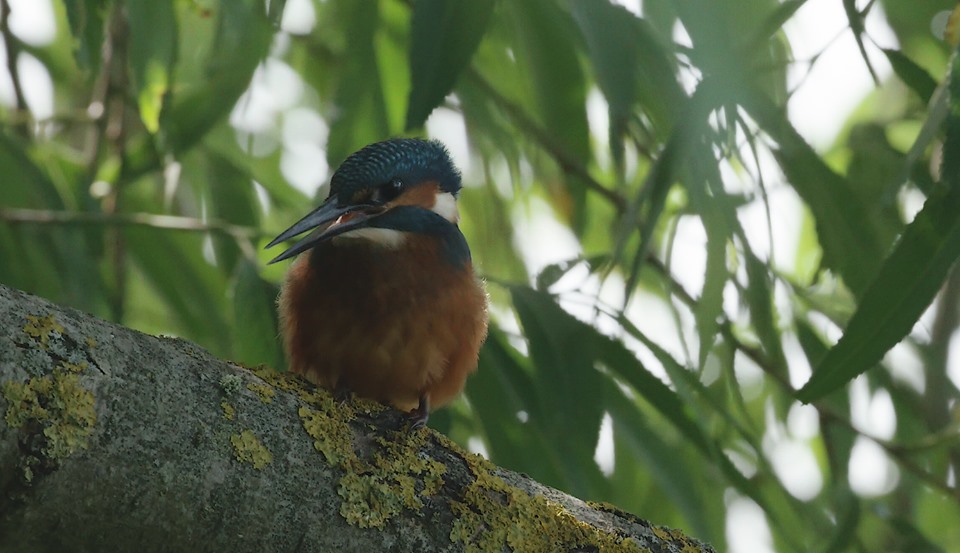 We continued to capture great remote footage. The 4K camera was powered over ethernet at a max 100 metre cable. I wasn’t certain how well it would hold up but everything seemed to be fine. Quite a relief when cabling that kind of distance.

A second brood did in fact come along and the entire river stretch was now full of the squeaking ‘peep peep peeeeeeep’. It has become such a familiar cry here, from dusk to dawn that the silence is almost deafening once they bed down and roost for the night.

So I had now settled into watching these two broods of youngsters as their browny grey feet turned to orange and their chestnut coloured breasts became lighter and bolder. The most magical aspect of watching kingfisher fledglings grow is watching for that lower mandible to either stay black or start to turn orange. Orange denoting the female.

It is my experience, from watching kingfishers over the years that the female tends to be the more dominant of the species. Males usually have to work quite hard to win her over, bringing fish as gifts before mating takes place. The same can be said for fledglings, it’s the females who like to dominate the perch, fending off siblings and vocalising her position. 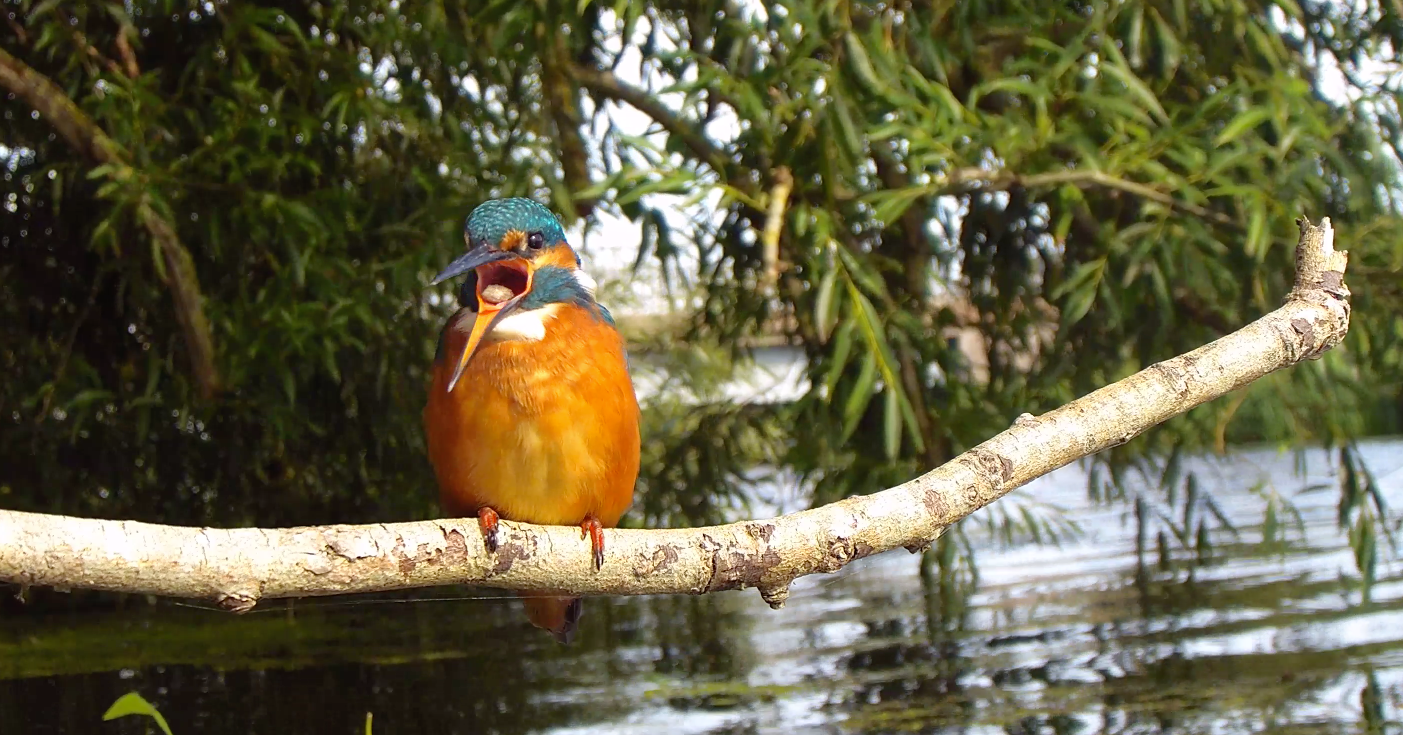 Towards the end of August, I saw the dad kingfisher catch a fish from the camera perch. It struck it several times as usual but then carried it off, rather than swallow it. A third brood?? Could it be?

Yes! On the 30th August 2 new Kingfisher fledglings were in town and what tenacious little characters they were. From the moment they arrived they were extremely vocal and dominant towards their older siblings. I have never seen such bolshy antics from fledglings. The second brood fledglings were being tested and challenged.

Below is a screenshot from the moment the third brood fledglings steal a fish straight out of the mouth of the second brood fledgling. This really was the highlight of the summer for me, to capture such interesting behaviour. This behaviour had Phil and me debating the behaviour and its was Philip’s wife, Anna who offered an explanation which I now believe to be the case. Anna had recalled the time when they looked after juvenile Jackdaws and she’d witnessed older siblings feeding younger siblings. A possible early nurturing instinct? Over the weeks to follow we saw more and more of this, clearly showing the older fledgling waiting around with a fish for the younger bird to follow. We saw snapping at the fish and beak, like in this clip of the fledgling and the fish.

The birds are certainly displaying some sort of mock nurturing and we’ve certainly never seen this kind of behaviour without the remote camera insight.

The perch has calmed down now as we greet cooler evenings and the odd falling leaf. The autumn is coming and the youngsters are finding their own territories to dominate. I will miss them but am happy to have captured the footage to watch back. This summer’s efforts have been dedicated to producing ‘Slow TV’ footage for our project with the Beacon Cancer Care Centre at Musgrove Hospital.

This message is only visible to admins.
Problem displaying Facebook posts. Backup cache in use.
Click to show error
Error: Error validating access token: The user has not authorized application 1332798716823516. Type: OAuthException